Can you get by with English in Tanzania? The answer to that is yes. Most people in Tanzania speak English. Nonetheless, Swahili is the native language in Tanzania, well not exactly.

In Tanzania, there are more than 120 different tribes. Most of them speak a different language. However, one of the founding directives, when the United Republic of Tanzania became independent in 1961, was that no ethnic group should dominate. To achieve this, the Tanzanian government has adopted Swahili as the official language of Tanzania.

With Swahili being the official language do you have to know it to travel to Tanzania? No, you don’t. In Tanzania, Swahili is taught and used exclusively in primary school. However, when students get to secondary school English is the primary language. Unfortunately, this causes a high dropout rate.

Despite English being used everywhere, there are a few key words and phrases you can learn and use around the country. This applies more to traveling in town such as the market or out in the countryside between safari parks.

Tanzania has many people selling food and souvenirs on the street around the smaller towns. Some of them can get rather aggressive with trying to push their wares on you. We have witnessed pedallers jumping on safari vehicles to get them to stop so they can sell to tourists. This doesn’t happen very often but you may have to deal with them poking their heads into your vehicle. So how can you keep them from getting too pushy? One way is to learn some Swahili.

These are the ones you will hear frequently, so learning them will allow you to understand what is being said.

Asante Sana Thank you very much

Hapana Asante No thank you

Habari How are you?

These words are not as important to know, but if you are enjoying learning Swahili, then why not?

Bei gain? How much is it?

Wakati gani? What time is it?

Ladha! It was delicious!

Nina mboga I am vegetarian

Siku nzuri Have a nice day

Again, it isn’t required to know the language, but it is good to know some words. It is fun to use them and the locals will also enjoy teaching them to you.

For the mountain, you definitely will hear, “maji” frequently. You need to drink water on your climb. and they will remind you often. You’ll also hear “polepole” if you are hiking too fast. “Asante” and “jambo” will also be used daily. And don’t forget “Hakuna mata”. This is actually not just from Disney’s Lion King it is an actual phrase and the mountain crew loves to sing about it.

On safari, “acha” is used when you want to stop and take a picture. When you are ready to proceed, then “nenda asante” (go, thank you) can be used. Keep in mind that that isn’t always the words that our drivers or guides may use. Because they may teach you some of these words in their tribal language instead of Swahili.

We hope this information makes traveling to Tanzania an even more enjoyable experience. We are confident that you’ll find the people of Tanzania as friendly and as pleasant as we do. 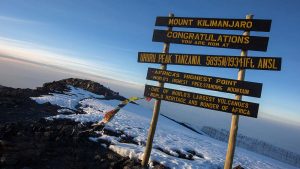