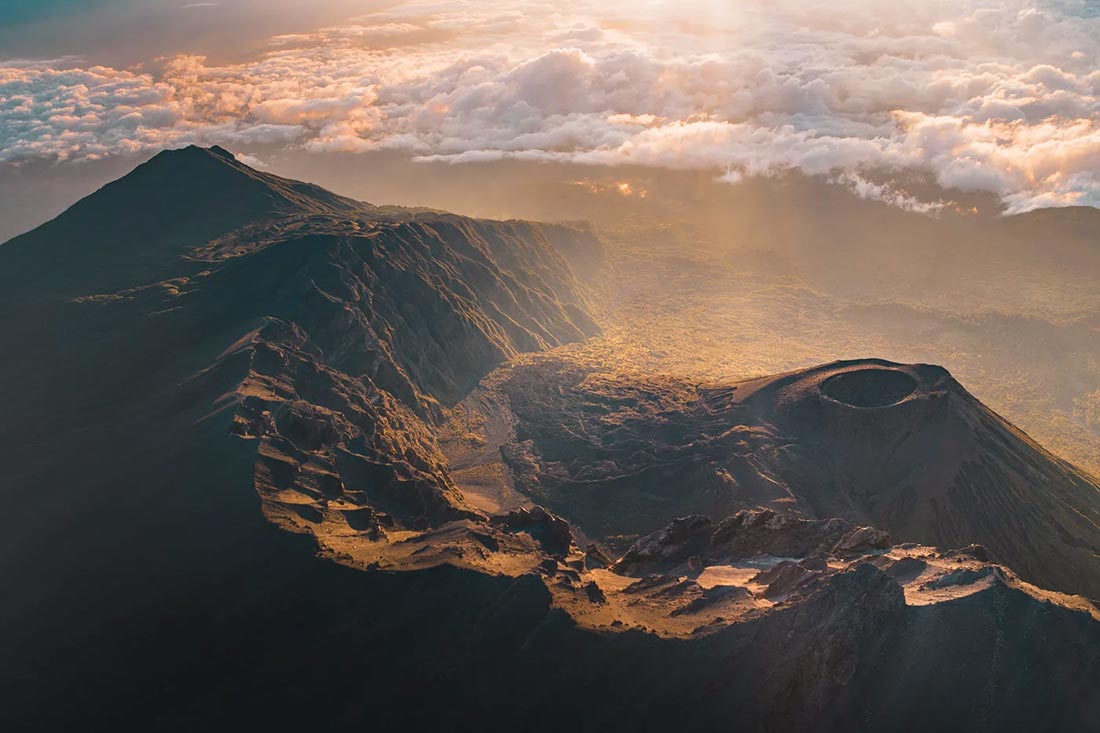 Many people chose to climb Meru before they climb Mount Kilimanjaro. They do this for a couple of reasons.

One is that the mountain exists. Many people like the challenge of climbing mountain peaks. They are referred to as “Peakbaggers”. They like to “bag” a new peak on each adventure.

The second reason people like to climb Meru is to acclimate to the elevation before heading up Kilimanjaro. Meru stands at 14,968 feet. This is taller than any mountain in the lower 48 states. Mount Whitney, by comparison, is 14,505 feet or 463 feet lower than Meru.

When you do climb, you will have a park ranger with you. Additionally, many budget operators will book your Meru climb and not send anyone with you. We have had lost or confused hikers ask our guides questions and try to hang with our clients. This is a frowned-upon practice and is the reason we encourage you to book with a reputable operator. 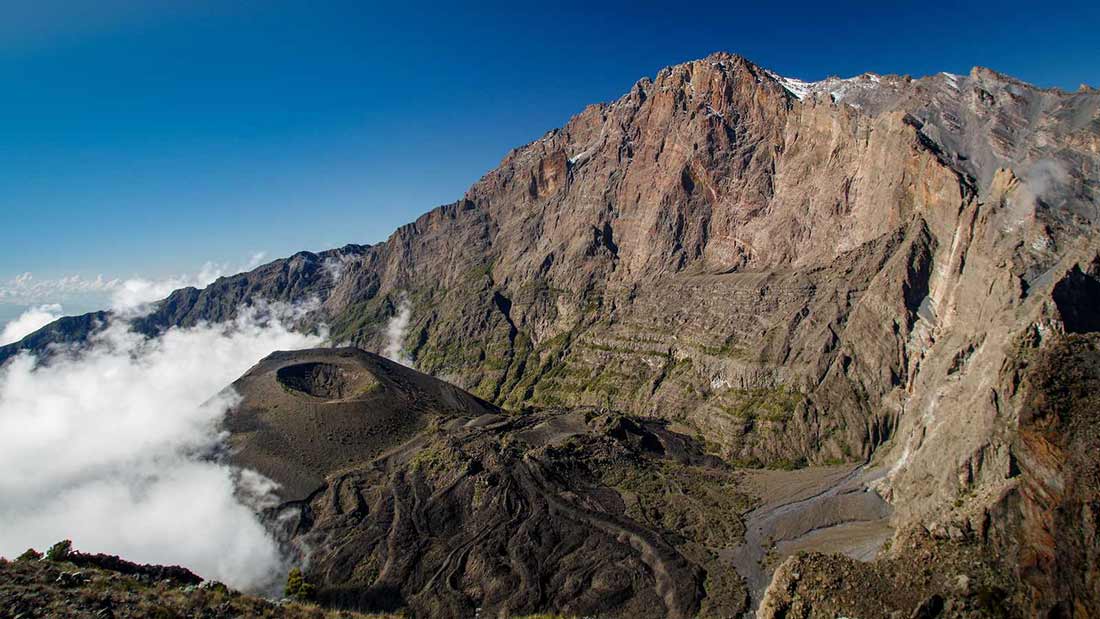 Just like Kilimanjaro, you have to ascend through several different zones of vegetation to reach its summit. However, unlike Kilimanjaro, Meru has a lot more wildlife to observe as you ascend to its crater rim. Meru lies in the heart of Arusha National Safari Park. So along the trek, you may see monkeys, giraffes, elephants, dik dik, warthog, and water buffalo. If birds are your thing, then keep your eyes out for the Hartlaub turaco or the silver-cheeked hornbill. 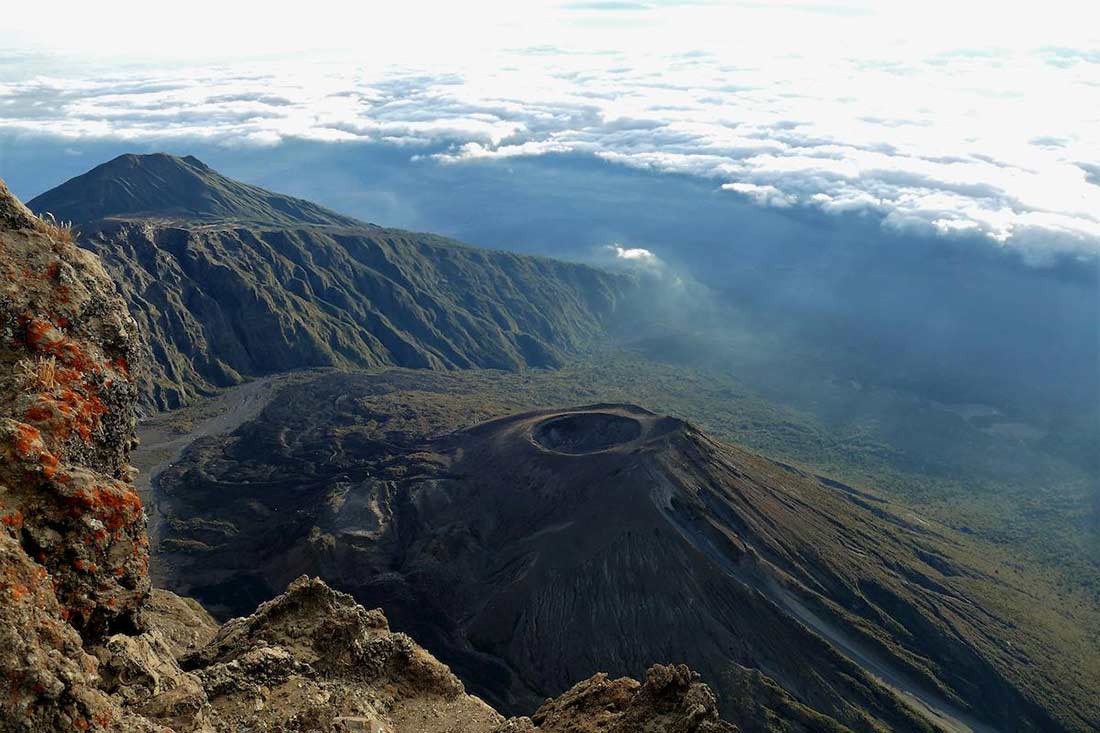 Your adventure begins by checking into Arusha National Park before proceeding through the Momella Gate (4,921 ft.). The trek starts in the grasslands where you’ll view water buffalo, warthogs, and elephants. Shortly, you’ll begin a steady ascent through the montane forest. You’ll stop at the famous fig tree to enjoy your lunch. By mid-afternoon, you have closer views of Meru’s towering cliffs and Ash Cone. The Miriakamba Huts (8,250 ft.) are situated in an idyllic grassy glade, and you will reach them in time to enjoy the beautiful views over the surrounding plains. If you are lucky, a giraffe may walk through the camp.

It is often clear in the morning, which may make it possible to view Kilimanjaro. From the Miriakamba Huts, you’ll climb steeply to the crater rim, called Elephant Ridge. You’ll follow a steep path through lush montane forest to reach the giant heather in the Moorland region near the saddle between Little Meru and the summit. A hot lunch will welcome you to Saddle Huts (11,712 ft.). Your afternoon is free to rest and enjoy the views or make the short climb to the nearby summit of Little Meru (12,533 ft.).

The summit push starts around 2 AM, It begins by climbing steeply for an hour to Rhino point (12,467 ft.). In icy conditions or strong winds, it may be unsafe to continue past Rhino Point, but sunrise from here is equally as spectacular as from Cobra Point. If the weather is fine, you’ll descend slightly and continue along or near a rough undulating ridge of ash and rock to reach Cobra Point (14,271 ft.). The stunning views include the cliffs of the crater rim, the Ash Cone rising from the crater floor, Kilimanjaro floating on the morning clouds, and the Rift Valley. As the sun climbs higher, the hike continues for another hour on a steep path to reach the summit of Meru (14,997 ft.). The view from the top is breathtaking.

Your hike back to Rhino Point between the crater’s sloping outer wall and the sheer cliffs of the inner wall is one of the most dramatic and exhilarating walks in Africa. Enjoy brunch and a well-earned rest at the Saddle Huts before continuing your descent to Miriakamba Huts where you will spend the night.

You’ll descend rapidly on a slightly different route than you ascended. You’ll pass through open grassland and mixed forest, with good chances of seeing wildlife. This trail has excellent views back towards the crater and over the plains of the national park. You will reach Momella Gate by late morning. A vehicle will take you back to Arusha where it is time for celebration.

Whether you are new to trekking or an avid hiker, Mount Meru is worth climbing. Many people consider it more difficult than some of the routes on Kilimanjaro. If you choose to add it to your itinerary, you won’t be disappointed. 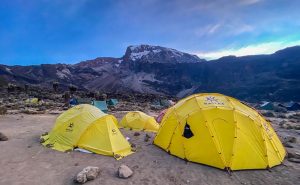 Where Do You Sleep On Kilimanjaro?