The Great Serengeti Migration is a constant procession of enormous herds of wildebeests. The herd includes zebra, Grant’s gazelle, Thomson’s gazelle, eland, and impala. The movement of the herd follows a fairly predictable pattern. There are only a few variables that alter its pattern—grass for grazing and the availability of water. The herd moves in a clockwise pattern. Due to their constant movement, there is no starting point. However, from December to March, it is located in the Southern Plains, so we will begin there. 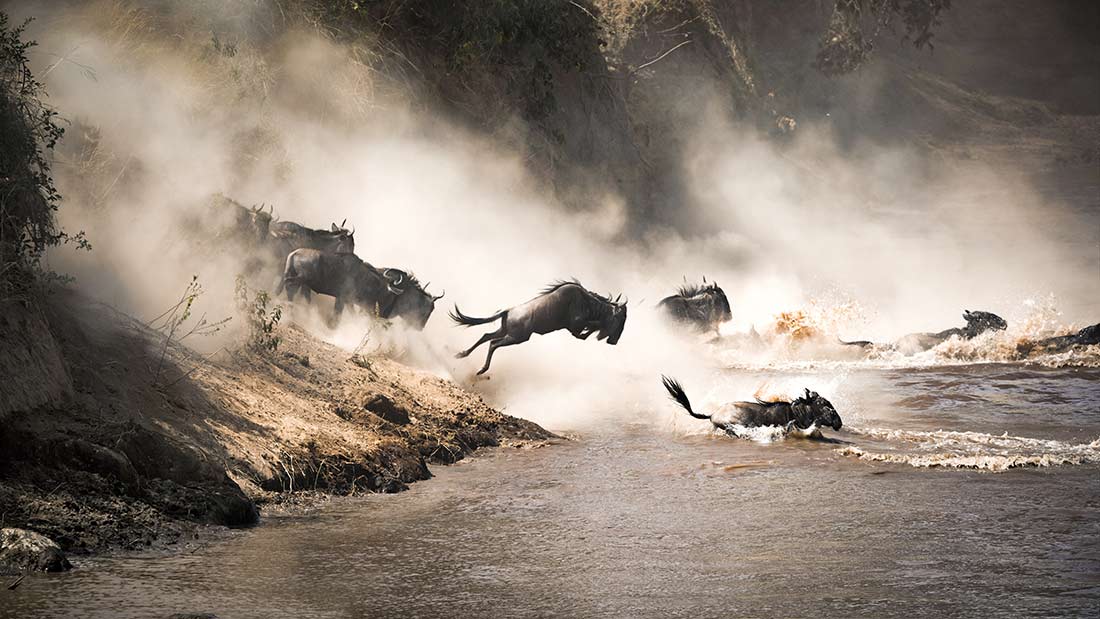 The short rainy season usually begins in November. The herd migrates south to the Southern Plains. From December until March the herd roams the plains of the Serengeti and the Ngorongoro Conservation Area. There is a two-week window near the end of February when they give birth to offspring. From March to April, the herd will begin traveling to the northwest.

From March through May is the long rainy season. The days begin as sunny and warm, but by the afternoon the rains move in. The rainy season peaks in April. Visiting the Serengeti during this month is not advisable since most camps become extremely muddy and the roads are impassable. Any other time of year is a good time to book a safari.

The wildebeest continue to migrate to the Maasai Mara as the rains end in May. Some cross the Seronera Valley to the north. Others travel through the Western Corridor. The animals are hunted by a variety of predators along the way. Serengeti lions pose the greatest threat – there are over 3,000 of them. The Leopard, Cheetah, and Hyena clans are also known to hunt them.

The herd begins to move north toward the Kenyan border in July and August. It spreads out from across the heart of the Serengeti to as far as the Ikorongo area.

As September approaches, the horde is met by a more serious challenge—the Mara River. This river flows out of the Maasai Mara Game Reserve, and the pack tries to cross it repeatedly. Confusion and panic often accompany the massive herd. After crossing the river into Kenya, the herd enjoys grazing in the open plains.

As the rains begin toward the end of October, the herd is once again on the move. It continues its journey to the south, passing through western Loliondo and the Serengeti National Park’s Lobo area. After the rains in November, it returns to the southern Serengeti’s grassy plains until it continues its migration in the spring. 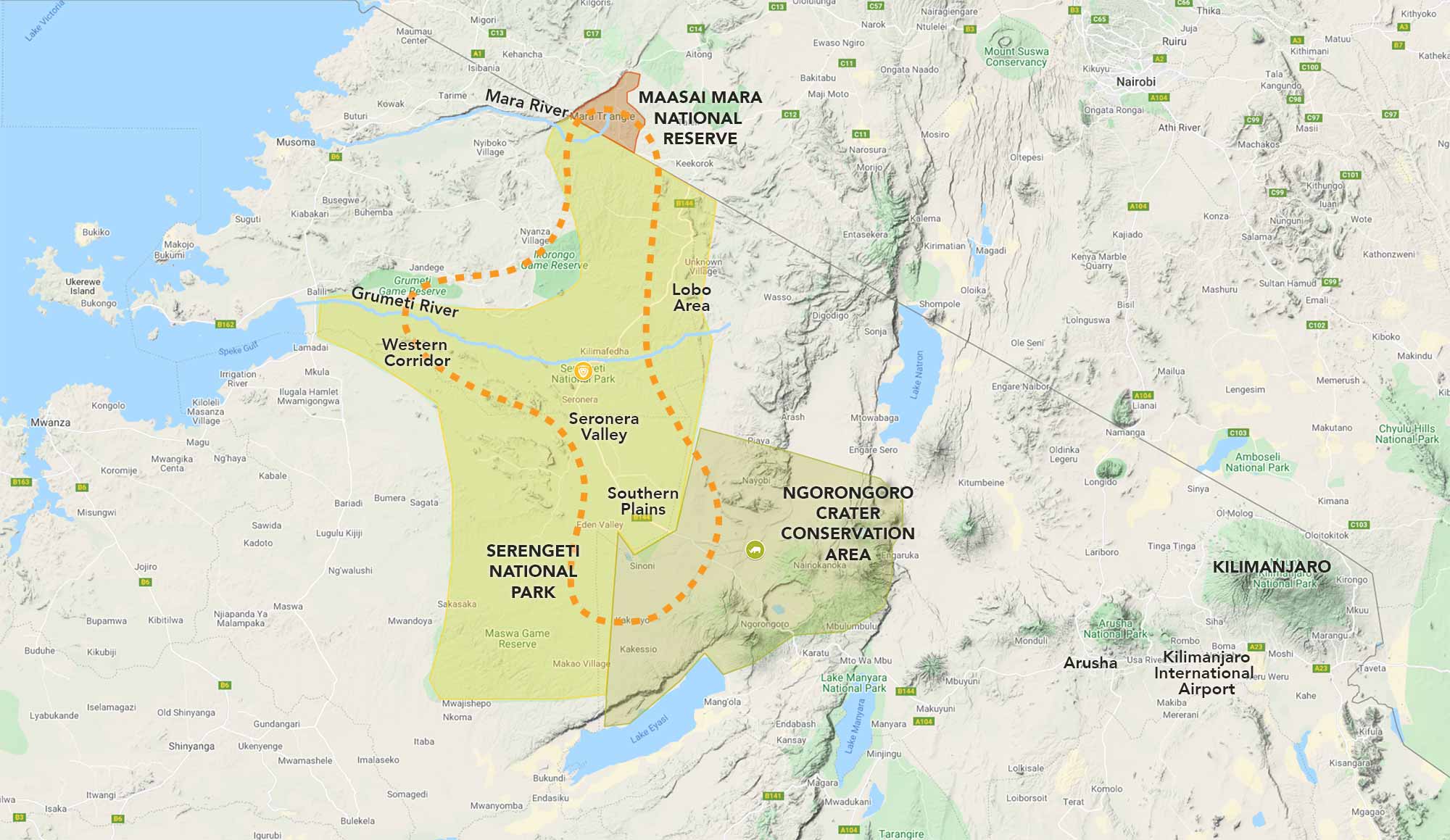 LOCATION OF THE HERD BY MONTH 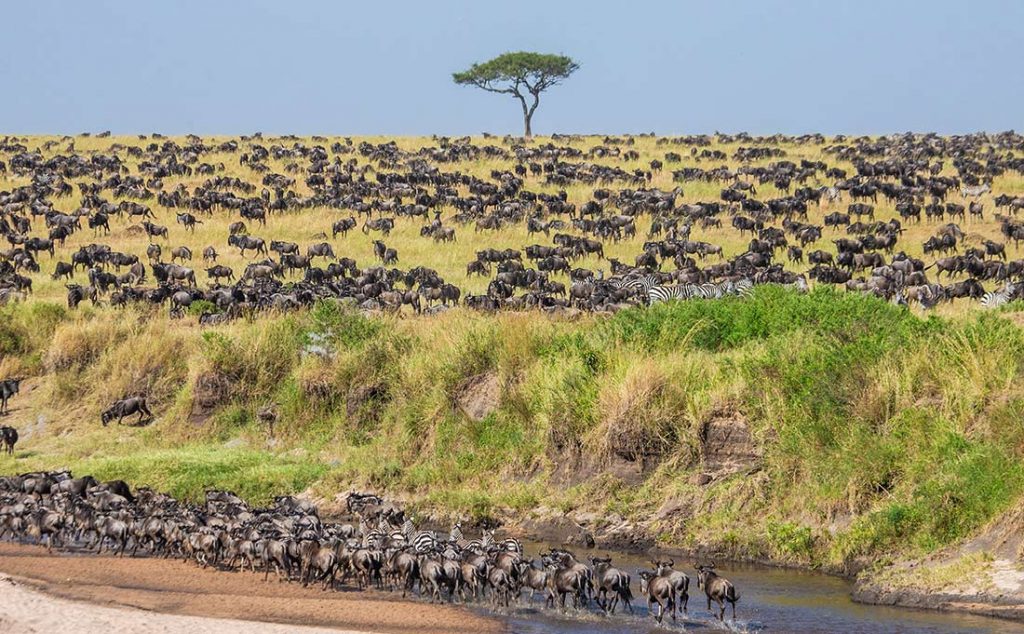 The herd is in the Southern Plains of Serengeti National Park and parts of the Ngorongoro Conservation Area, the herd is spread out grazing.
FEBRUARY 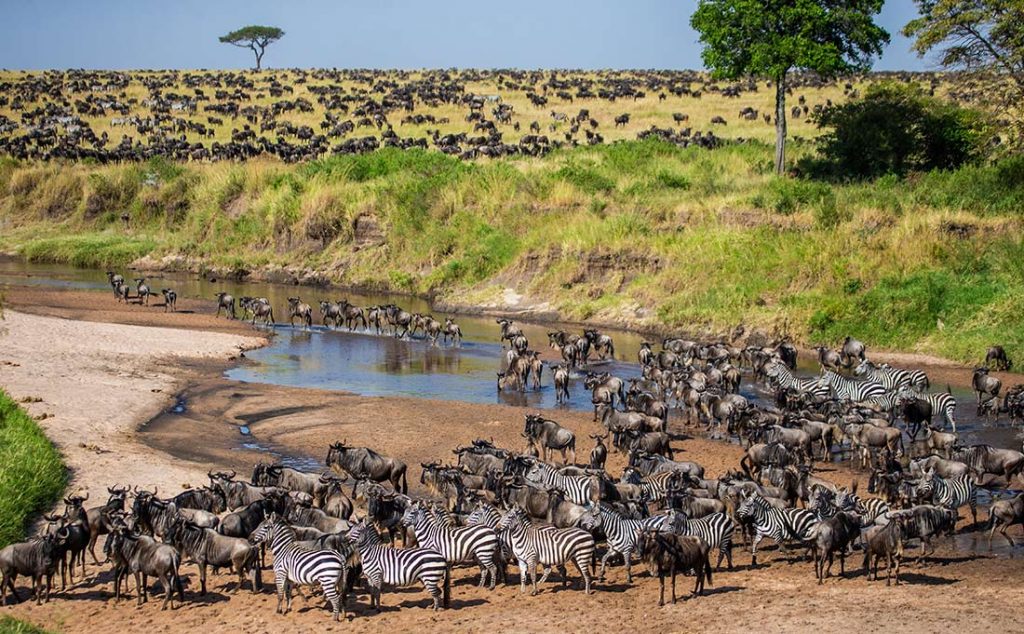 The herd spreads out across the short grassy plains. Most of them calf in a two to three week window.
MARCH 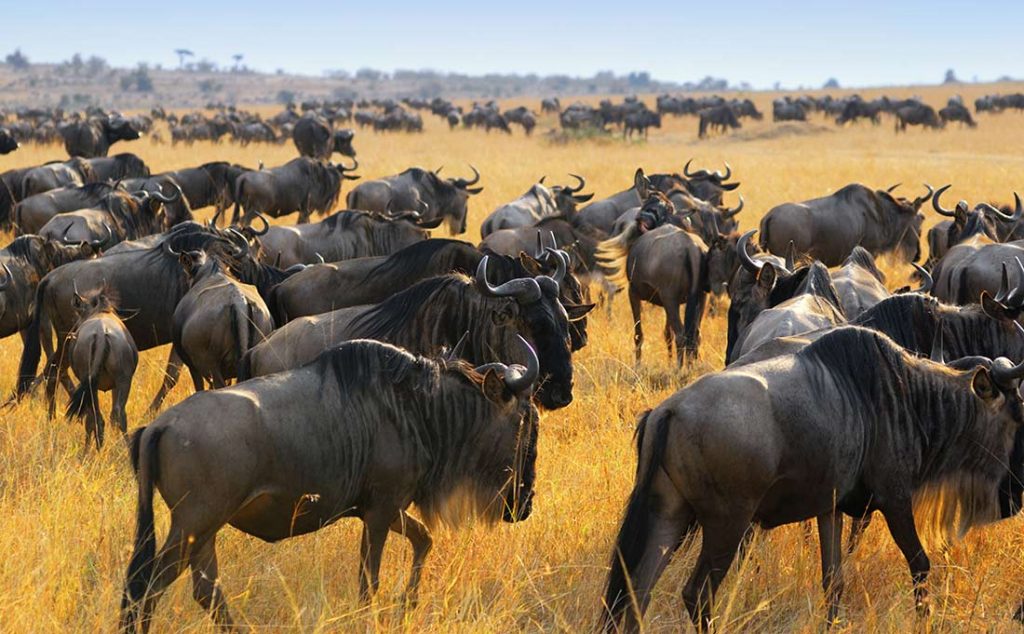 The herd is still spread over the short grassy plains of the southern Serengeti, Loliondo, and the Ngorongoro Conservation Area.
APRIL 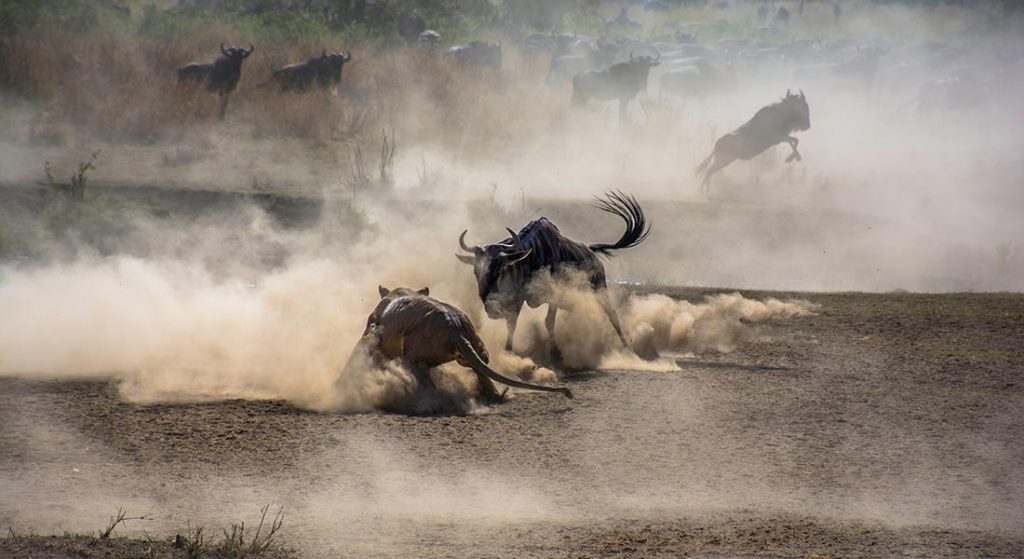 The herds start migrating north, through the Moru Kopjes and Seronera areas.
MAY 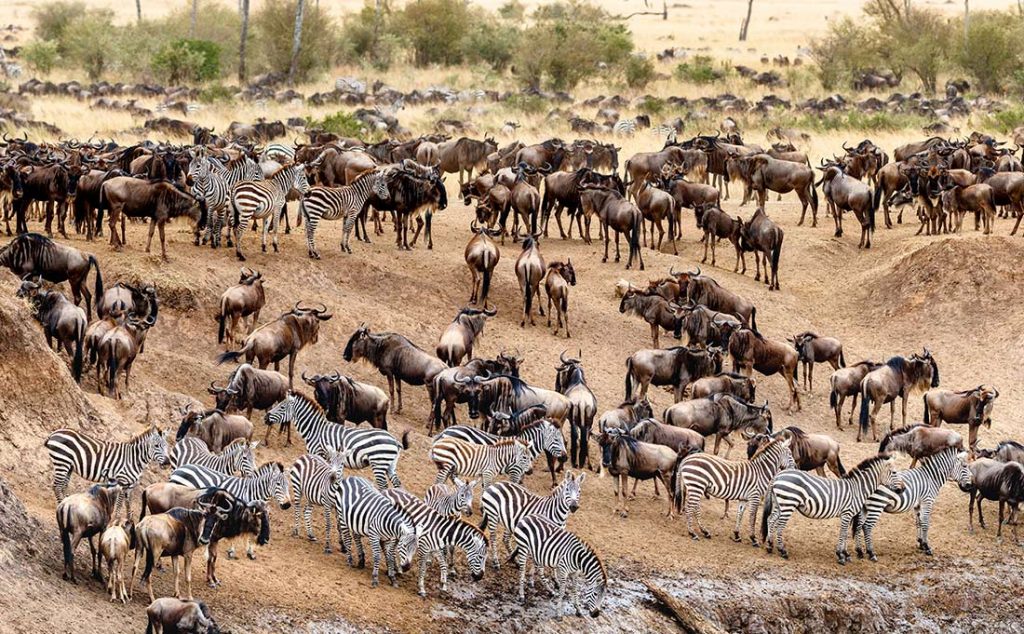 The migration heads north through Seronera towards the Western Corridor.
JUNE 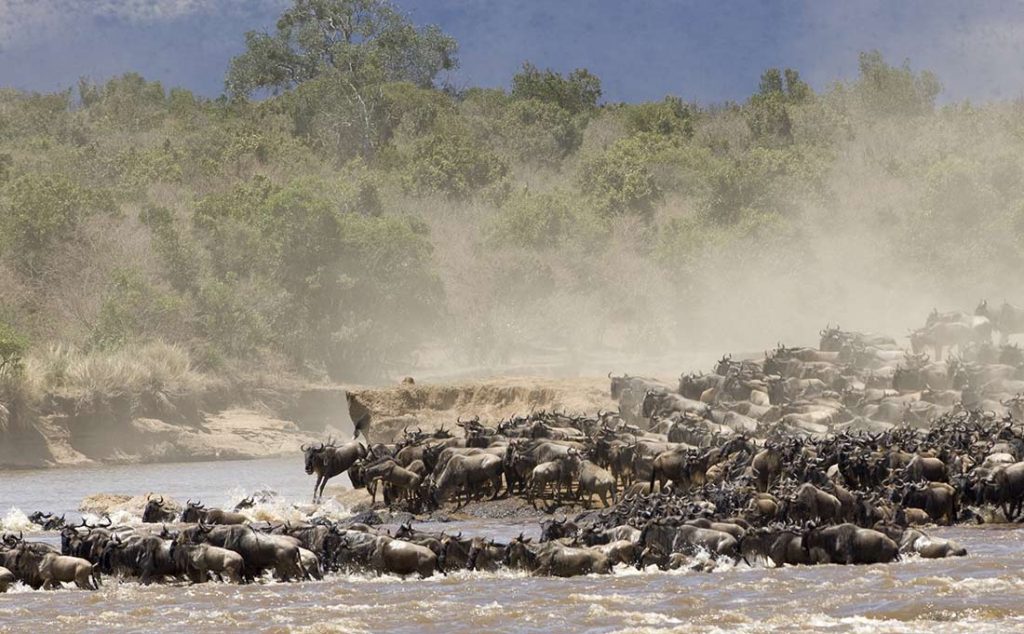 The herds mass in the western corridor. They bunch up before crossing the Grumeti River.
JULY 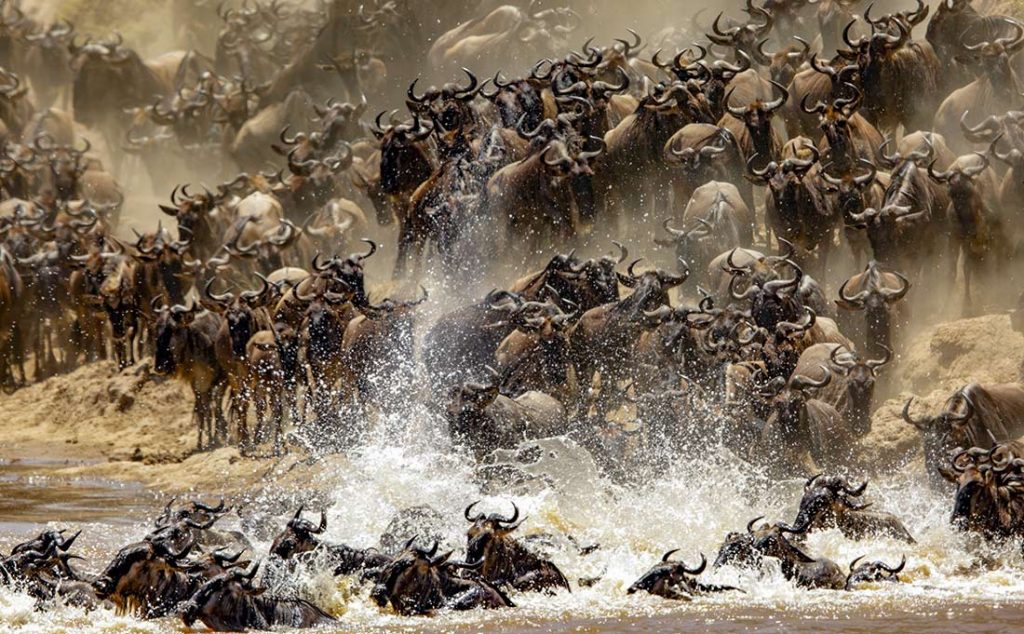 Some of the herd heads across the Grumeti river and through Grumeti Reserve; others head north into the Serengeti.