Lake Manyara National Park is a small safari park located right at the end of the Eastern branch of the Great Rift Valley. 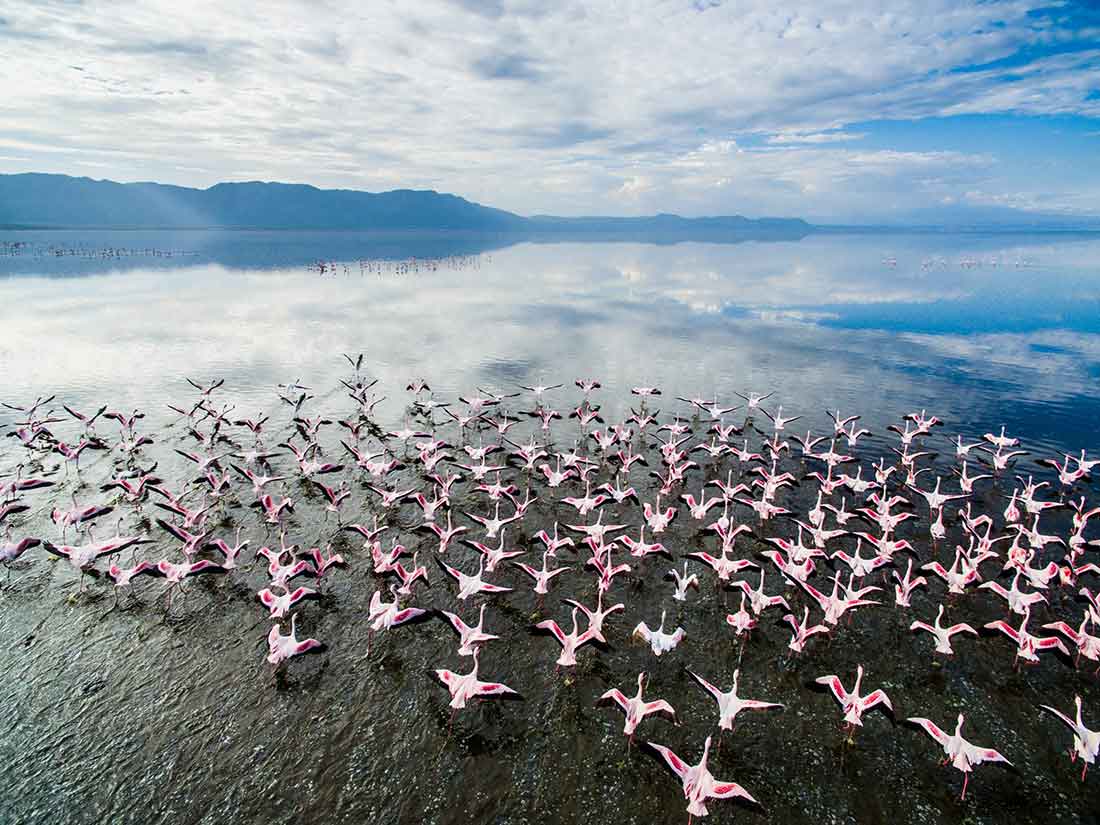 The Park encompasses Lake Manyara and is home to thousands of waterfowl including flamingos, black herons, martial eagles, and silvery-cheeked hornbills.

Manyara provides the perfect introduction to Tanzania’s birdlife. Scientists have documented more than 400 bird species. On your safari, you can easily see at least 100 in one day.

When the water level is right, the lake is also home to thousands of pink-hued flamingos. More than 50 birds of prey have been observed as well, including the crowned eagle. From November through April migratory birds are also present.

Manyara derives its name from a plant called Euphorbia tirucalli, known as Emanyara in the Maasai language. The Maasai use this hedge-like plant to protect their bomas. The term refers to not only the lake, but the entire region. 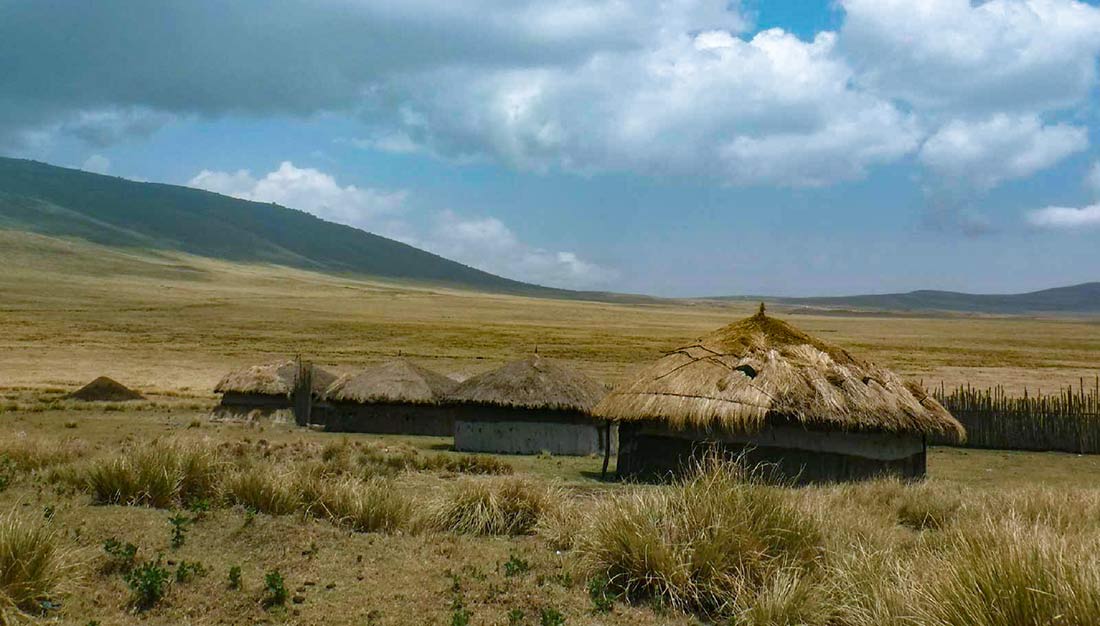 A boma is a livestock enclosure and/or community enclosure. They are commonly used in many parts of the African Great Lakes region, as well as Central and Southern Africa.

When used as a livestock enclosure, the word boma comes from the Swahili language.

In the form of fortified villages or camps, bomas were commonplace in Central Africa in the 18th and 19th centuries.

Thorny acacia branches make up the walls of the bomas. On your way to the safari parks you’ll see them along the roads in rural villages.

The rainfall pattern of the park is bi-modal. Short rains occur from November to December. The long rains run from February to May.

The dry season is from late June to October.

Access to the park is year round. However, June through October is the best time for viewing large mammals. November through July is an ideal time for bird-watching.

When you leave Africa, as the plane lifts, you feel that more than leaving a continent you’re leaving a state of mind. Whatever awaits you at the other end of your journey will be of a different order of existence.”

The Great Rift Valley is a name given to the continuous geographic trench, approximately 3,700 miles long. The trench begins in Lebanon’s Beqaa Valley in Asia. Its western fork continues to the country of Mozambique in Southeastern Africa. The eastern fork terminates in Tanzania.

Today, the Great Rift Valley is usually referring to the valley of the East African Rift. It is also known as the Gregory Rift, honoring Scottish explorer John Walter Gregory who discovered it.

The divergent plate boundary extends from the Afar Triple Junction southward across eastern Africa. It is splitting the African Plate into two new separate plates. Geologists refer to these new plates as the Nubian Plate and the Somali Plate.

Furthermore, the Great Rift Valley divides the country of Kenya almost straight down the length of the nation. It separates the east from the west. This region consists of an inhospitable desert, fertile farmland, flat arid plains, steep cliffs, and at least one very usual, scaly, fin-backed monster. 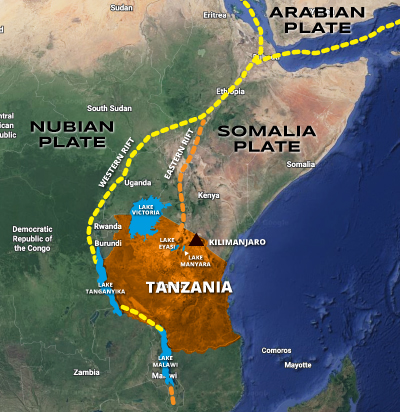 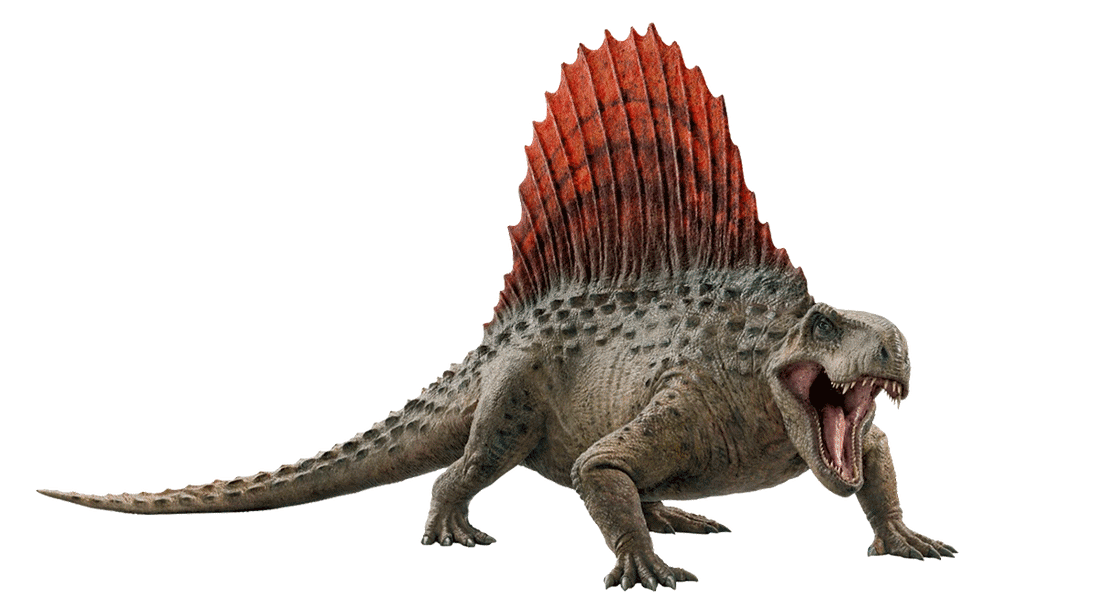 Reports of Rift Valley Monster were once believed to be a dinosaur or dinosaurs that had survived extinction. Since parts of the Valley house very deep canyons, it was difficult for explorers to penetrate the forbidding depths to verify the creature’s existence.

Yet, throughout the ages, people have sworn they have seen it.

These numerous accounts led cryptozoologists to speculate that what they saw was the Dimetrodon Grandis. The Dimetrodon Grandis was not a dinosaur. It was a mammal-like reptile. It was notable for the large, sail-like fin which adorns its spine. This specimen could be from the family known as Sphenacodonts.

Today, researchers are skeptical that the creature ever existed. No one has made mention of seeing one in many years, if at all. This is liken to Bigfoot and Nessy. With Smartphones, you’d think they’d have shown up on TikTok by now.

The Gregory Rift is the eastern branch of the East African Rift fracture system. A thermal plume created the rift which now separates the Somali plate from the Nubian plate. Although the term is sometimes used in the narrow sense of the Kenyan Rift, the larger definition of the Gregory Rift is a cluster of rifts that extend from the Gulf of Aden, near Saudi Arabian south through Ethiopia and Kenya. It ends in the country of Tanzania, near Lake Manyara National Park. Ancient fossils of early hominins, the ancestors of humans, have been found in the southern part of the Gregory Rift in the Olduvai Gorge.

The Olduvai Gorge is a misspelling of Oldupai, a Maasai word for a wild sisal plant that grows in the area. The Gorge falls within the Eastern fork of the Great Rift Valley. Located in the country of Tanzania, it is one of the most important paleoanthropological sites in the world.

It has proven invaluable in furthering our understanding of early human evolution.

Paleoanthropologists have found hundreds of fossilized bones and stone tools in the area dating back millions of years, leading them to conclude that humans evolved in Africa.

The Olduvai Gorge is a steep-sided canyon. It is approximately 30 miles long and lies in the eastern Serengeti Plains. In 1937, a British and Kenyan paleoanthropologist-archeologist team of Mary and Louis Leakey established and developed the excavation and research programs at Olduvai Gorge. The Leakeys were able to achieve great advances in human knowledge. They became world-renowned based on their discoveries. Among their most notable finds were several extinct vertebrates. This included the 25-million-year-old Pronconsul primate, one of the first and few fossil ape skulls discovered.

The dig site is significant in showing the increasing developmental and social complexities in the earliest humans, or hominins. Stone tools reveal their development. Before tools, there was evidence of scavenging and hunting. The presence of gnaw marks that predate cut marks highlight this.. The ratio of meat versus plant material in the early hominin diet was also significant. All these factors show an increase in cognitive capacities. This marks the beginning of the period of hominids transitioning to hominin—that is, to human—form, and behavior.

American author Ernest Hemmingway once declared the region encompassing Lake Manyara National Park to be, “…the loveliest I had seen in Africa.”

Lake Manyara is located between Tarangire National Park and the spectacular Ngorongoro Crater in northern Tanzania. It is about an hour and a half drive from the city of Arusha. The Lake Manyara region is teeming with exotic flora and fauna nestled at the terminus of the Rift Valley.

One of the primary draws of the park is the enormous diversity of wildlife it contains. During the wet season, you can expect to see flocks of flamingos numbering in the thousands on the lakeshore.

The Dik Dik is a very tiny herbivore that looks like an antelope. Foliage and berries are their main source of food. Local predators such as Tanzanian cheetahs, African leopards, and Maasai lions hunt them because of their small size.

A hippo pond in the area allows tourists to get a good look at one of Africa’s most iconic animals.

The African bush elephant roams the park and visitors can drive up close for stunning photos.

Lake Manyara National Park is a good way to immerse yourself in the safari parks without the long drive to the Serengeti. Near the eastern gate, you’ll drive through numerous baboons and blue monkeys as you weave your way through the jungle.

The unique combination of plants and animals in the forest alone is truly stunning—and practically within arm’s reach.

After you exit the forest, you’ll drive through the floodplains. Here you’ll see giraffes, buffalo, flamingos, and zebra roaming wild.

Beyond the jungle, you’ll make your way around the Lake itself. It is a shimmering blanket of blue awash with pink of the flamingo, hippos, and water buffalo.

Across the lake, you’ll see the edge of the volcanic Maasai Steppes reaching out to touch the sky. After spending time at the lake, you’ll enter the acacia woodland. This is the favorite spot of tourists. It is here that you will see elephants, blue monkeys, baboons, mongooses, and possibly the elusive tree-climbing lions.

Ultimately, Lake Manyara National Park is a great place for people who want to see several sides of Africa all at once. One of the great things about the park is that, despite being so close to Serengeti National Park, it doesn’t get the same crowds. Your experience is likely to be much more intimate and personal without having to sacrifice the quality of the scenery or the diversity of the wildlife.

If you want to have a relaxing safari surrounded by some of the most stunning views Africa has to offer, Lake Manyara National Park is definitely worth a visit.

Since it is a small safari park, we have combined it with several other safaris beginning with the 2-day standard safari. Add a safari after your climb for a perfect way to relax and experience one of the best safari parks in Africa.

For the 3-Day Safari we will take you to the action-packed Tarangire National Park which is known for its large herds of elephants. If you are lucky, you may also spot the elusive tree-climbing lions. One day two you’ll visit the tiny Lake Manyara National Park which encircles the lake and is a wonderland of birds. On day three you’ll visit the stunning Ngorongoro Crater Conservation Area. It is an 11-mile across, 2,000 foot deep extinct volcanic crater that is home to all the same animals as the Serengeti. You’ll spend the day entertained by the mating ostrich, stalking hippos, and lazy lions.

For the 5-Day Safari you’ll visit the action-packed Tarangire National Park. On day two you’ll see Lake Manyara National Park. On days three and four, you’ll make the long trek through the crown jewel of safari parks the Serengeti. Along the way, you’ll be able to see the herds of all types of animals. There will be gazelles, impalas, giraffes, elephants, and wildebeest. In the trees, leopards will be dining on their prey. Hyena, lions, and vultures will battle over a meal of gazelles and the water hides deadly predators like crocodiles and hippos. On day five you’ll descend the stunning Ngorongoro Crater Conservation Area.

Going to Africa and not doing a safari would be a shame. Tanzania is home to the best safari parks in the world. You can’t do a safari without visiting the Serengeti and you may as well stop by the little-hidden gem of a park known as Lake Manyara along the way.